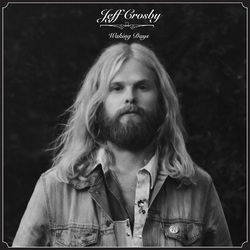 Crosby’s life experiences and observations can be found in the meaningful and thoughtful stories - including the title track - on Waking Days.

Playing 250+ shows a year from the ages of 19-25, Idaho native Jeff Crosby has spent a lot of life on the road. In addition to fervent touring, Crosby has released two EPs and two full-length albums, the last of which, Silent Conversations, saw his music featured on “Sons of Anarchy.” On November 6th, Crosby, with his band The Refugees, released their latest, Waking Days.

Waking Days blends the sounds of Americana, folk and rock into an album whose musical soundscape creates an atmosphere of days past and those ahead, love lost and found and dreams to be realized. Crosby’s raspy vocals, along with excellent musicianship and production, gives life to stories and characters that you invest in and relate to.

There’s loneliness in opener “City Girl,” which tells of a woman who seeks to finally have that one conversation/connection that leads to something different, and “Carved in Sandstone,” which focuses on a love trampled by jealousy. Melodically rootsy “Water Shapes and the Canyons” and “Emily” both speak of personal loss. The former expresses feelings after the passing of a friend, desiring to keep the person “alive in a memory,” while the latter speaks to a lost love.

In contrast is the gentle and flowing “Only One I Need” which is a romantic ode to the one person that believes in you and keeps you going….appropriately ending with boarding calls signaling another journey, a journey which you can take knowing that one person will always be there. Continuing that sentiment (captured by Whelan’s pedal steel) is the reflective “Red White and Blue,” where the only certainty in life is her love.

Apprehension and angst (and 90’s grunge) are conjured up in the gruff throatiness of Crosby’s vocals in “What’s Normal Now?” while “Homeless and the Dreamers” tells of those with “stories in the lines of the faces walking by,” at the same time paralleling his own weary tale of feeling lovesick and lost.

Questioning and optimism co-exist in the universally relatable, “I Should be Happy” which contemplates life choices, things one can’t grasp and doing what you have to in order to get by. “Stop feeling worthless…I ain’t a fool but know that I ain’t the sharpest tool in the shed but I’m making it work here….It ain’t so bad.”

Crosby’s life experiences and observations can be found in the meaningful and thoughtful stories – including the title track – on Waking Days. Closing the album, it merges love, desire and uncertainty into experiencing your own “waking day” to define, seek and find your own American dream.